WE ARE NOW ACCEPTING NEW PATIENTS

Original Articles By Dr. Lavin Featuring Expert Advice & Information about Pediatric Health Issues that you Care the Most About 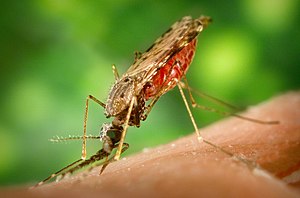 Recent reports document this is happening and that we can anticipate a big jump in the number of mosquito bites through October.

At the office, we have seen the beginning of this big jump, with a large increase in the number of calls about mosquito bites.

Mosquito Bite Basics
As the picture above shows, mosquitoes are tiny insects that live on the blood of animals they bite.  To make their living, they must slide a tiny tube into a blood vessel and suck some blood out the tube, all without you noticing in time to smash them.
Aside from being noticed and killed, their other challenge is to make sure your blood does not clot while their snout is in your capillary.
Here is why most people get a reaction.  To keep your blood from clotting during their visit, the mosquito first injects a little anticoagulant.  This material has an impact on your immune system, and this impact leads to inflammation at the site of the bite.  It’s this inflammation that causes the very familiar sight of a mosquito bite, namely, a red bump, often with a tiny dot in the middle where the bite occurs, and surrounding redness:

Another basic to keep in mind is that the younger you are, the more vigorous your immune system, and so the more dramatic inflammation from mosquito bites can be.  Think of how young children can easily generate fevers to 105, but adults rarely go past 102.  Just so with mosquito bites.  Young children can get quite big red areas from even one bite.

Chickenpox
Now, take a look at this picture of the rash of chickenpox, and you can see why it makes sense for people to wonder if their child gets a bunch of mosquito bites, whether it really is mosquito bites or chickenpox:

But there is a difference.  Notice that chickenpox nearly always ends up having three types of rash:
starts with red spots which become blisters, which become scabs.  The red spots of chickenpox and small mosquito bites look about the same, really quite similar.  That makes the two conditions confusing to sort out.

In a few days the red spots of mosquito bites are still red spots, or gone, or scratched to scabs; but the red spots of chickenpox become tiny yellow-filled blisters that we call vesicles.  These vesicles then turn into scabs without any scratching.

Of course, if you are not sure that your child’s mosquito bites are not chickenpox, feel free to call.
Hopefully this guidance will help, but should not stop you from inquiring.

Let’s talk about mosquito bites and infections, then you decide.

The skin of the eyelid is very loose and capable of rather impressive swelling.  Even a simple mosquito bite can cause swelling enough to close the eyes shut.  The inflammation of a mosquito bite causes a lot of fluid to accumulate in the eyelid, especially if you lie down for a night’s sleep or a nap.  The swollen eyelid has a pale pink color, is not warm, often only involves one lid- just the upper or lower.  The redness of the swollen eyelid from a mosquito bite is pale, not deep red, and the swelling is soft, like a partially inflated water balloon.  The eyelid feels a little bouncy, not hard.  The eyelid can be itchy, not typically painful, and often there is a red dot where the bite occurred.

When an eyelid is infected, all those properties of the eyelid are different.  Infections almost always spread to both eyelids, the redness is deep not pale, the eyelid feels hot and often hurts, and there can be pus.  The whole look is more like an angry red, hot appearance, and not the soft watery pale red of a mosquito bite.

Now with that in mind, what do you think of the picture of the swollen eyelid, mosquito bite or infection?
The answer is mosquito bite- only one lid, the upper is swollen, the redness is faint, the swelling is soft looking.

One last clue, swelling from mosquito bites almost always gets worse after lying down for awhile, since most of the swelling is simply water accumulating in the area.  Sitting or standing helps the fluid move and the swelling gets better.  This is why when young children get a mosquito bite on their eyelid, they frighten parents after sleeping- their eye is swollen shut!  But ofter after an hour or so of getting up, the swelling is much less.
Swelling from infections almost never shrinks after getting up.

Again, these tips are meant to help.  Of course, if questions still remain feel free to call us.


BOTTOM LINE
The key points to keep in mind are:

View all posts by advancedpeds →

Outcomes: The Importance of the Long View
New Book by Dr. Lavin: The 5 most important things To do during pregnancy to insure the health of your new baby.

39 Responses to Mosquito Bites on the Face: When to Worry

*Disclaimer* The comments contained in this electronic source of information do not constitute and are not designed to imply that they constitute any form of individual medical advice. The information provided is purely for informational purposes only and not relevant to any person\\\\\\\\\\\\\\\\\\\\\\\\\\\\\\\'s particular medical condition or situation. If you have any medical concerns about yourself or your family please contact your physician immediately. In order to provide our patients the best uninfluenced information that science has to offer,we do not accept samples of drugs, advertising tchotchkes, money, food, or any item from outside vendors.

Get Our Regular Newsletter Updates

Dr. Hertzer has been in practice for over 15 years with special interests in development, adolescent care, and nutrition.

Dr. Lavin has been in practice for more than 25 years and is the current Chairperson of the AAP Committee on the Psychosocial Aspects of Child and Family Health.

Meet Dr. Lavin
‟Dr Lavin has been there for my family every step of the way. Whether it is 4am or 4pm, I know that I can always count on Dr Lavin….”
Parent of Patient
Read More Testimonials
Real Answers with Dr. Lavin
See All...